The Mason Conversation is a series named in honour of Sir Anthony Mason AC KBE GBM marking his outstanding generosity and contribution over decades to UNSW Sydney. As well as a distinguished career in the law, including as Chief Justice of the High Court of Australia (1987-95), Sir Anthony was the fifth Chancellor of the University of New South Wales between 1994 and 1999 and the inaugural Chair of the Advisory Committee to the Gilbert + Tobin Centre of Public Law.

The Mason Conversation series will become a feature event in the Gilbert + Tobin Centre’s calendar. Each year, the event will present a prominent person in conversation about contemporary issues in public affairs with a particular focus on public law.

The Honourable Michael McHugh AC QC is a former justice of the High Court of Australia.

McHugh was appointed as a judge of the High Court in February 1989. He held this position until October 2005, and was the Acting Chief Justice for various periods between 1999-2005. After he retired from the High Court, McHugh was appointed as one of the Non-Permanent Justices of the Court of Final Appeal in Hong Kong, a position also held by Sir Anthony Mason. McHugh currently practises as an independent mediator and arbitrator at Eleven Wentworth in Sydney. 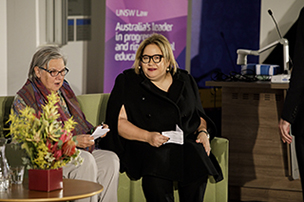 The second Mason Conversation featured Ms Patricia Anderson AO and Professor Megan Davis in dialogue with Professor George Williams and audience members. Pat Anderson and Megan Davis shared the leadership of a unique and historic public law process in 2016-17: the deliberative Regional Dialogues and First Nations Constitutional Convention that culminated with the Uluru Statement from the Heart.

The conversational nature of this event allows for unique insights into the people behind processes at the highest level of politics and government in Australia. Pat and Megan are two Aboriginal women from different generations and backgrounds, whose personal and professional experiences are not just remarkable in themselves but also illuminate important dimensions of contemporary Australian society.

The video of the event is available here 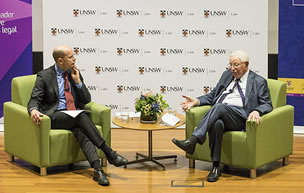 The Inaugural Mason Conversation featured a dialogue between Sir Anthony Mason, Professor George Williams and members of a large public audience, including many UNSW Law students. Sir Anthony discussed present trends and future challenges for Australian law and government. He talked about influences and milestones in his long career as barrister, judge and public figure, and his personal reflections were delivered with Sir Anthony’s customary clarity, succinctness and dry wit.

The video of the event is available here.