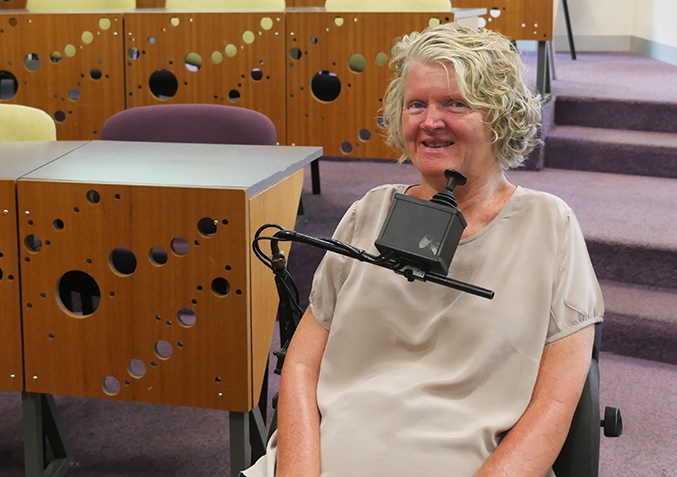 The Law Faculty foyer is buzzing with students, trying to escape the wet. Upstairs, in the Law Faculty offices where the scene is not so manic, Rosemary Kayess, a Senior Research Fellow at the UNSW Social Policy Research Centre is sitting at her desk. She looks up from her computer after checking the Sydney rain radar to let me know the storm should pass by the time the interview is finished. She does this out of kindness after I mention I left my umbrella at home.

Ms Kayess is a human rights lawyer and began teaching at UNSW in the mid-1990s.

“In fact, I actually think I’ve spent more than half my life here at UNSW, which is a bit embarrassing,” she says, laughing.

“I studied here to do my second and third degrees and started teaching in 1994. I taught Policy Studies in Arts and Social Sciences until 2002 and then taught international law and discrimination law in 2005, here in the Law faculty. I then did a short stint with the Human Rights Commission in between.”

'I've never wanted disability to define me and my work … whilst people call me a disability advocate, I'm a human rights activist, more to the point.'

Ms Kayess is also Vice-Chair of the United Nations (UN) Committee on the Rights of Persons with Disabilities.

“I will note, though, that I've never wanted disability to define me and my work. My research is not in disability. I'm not a disability specialist,” she says. “I know that sounds strange, as I’m an independent expert on a UN body. But essentially, my work here at Law is as an international human rights lawyer. I teach, research and work across all human rights issues, including disability, but disability is one aspect of it.

“I'm probably very much stronger in terms of disability just because I have lived experience with disability. But I also have strength in women's rights. So, whilst people call me a disability advocate, I'm a human rights activist, more to the point.”

Ms Kayess was 20 years old when she sustained a spinal injury in a car accident.

“And so, it becomes primarily a workplace rather than a home. It institutionalises you. The priorities tend to be the staff priorities, rather than your priorities, even though it's supposed to be your home. There was a lack of alternative options to congregate care for people with disability. So, the politics and the policies around disability became of interest to me.”

The significance of International Day of Persons with Disabilities

We begin to talk about the annual International Day of Persons with Disabilities, which is held on 3 December, and what it means to Ms Kayess.

“It gives an opportunity within mainstream spaces to acknowledge disability as part of our community. And to really just celebrate the diverse things that people with disabilities do. One of the things we're doing here at the Law School is an art exhibition by Indigenous artists with disability. Other workplaces will do morning tea and have speakers, so it's about getting disability in front of the wider community,” explains Ms Kayess.

“For me it’s about that opportunity just for people who wouldn't normally engage with the concepts. The risk is it becomes a bit of ‘inspiration overload’. So that's why people with disability need to have a leadership role in the activities that take place, so it's done sensitively and doesn't portray people with disability in a light that's not positive.

“It's about realising the strengths of people with disability and the positive things they do in our community. And that many of us just live our life. We don’t do anything special. We just live our life and it's trying to get people to see that. It doesn't have to be, and it shouldn't be considered, something special or different. It's just another aspect of our community”.

'Disabilities are an inherent part of our community. We need to recognise it as such.'

We discuss how we can better incorporate inclusion in the community. Ms Kayess says the best way is to have inclusion. The best way for kids to learn that disability is just one aspect of the human condition is for them to go to school with kids with disability.

“I see that as critical, because their whole life experience is going to be one of inclusion. So, when they finish school, they go to expect their workplace to be inclusive. They are going to expect their workplace to be representative of the whole society. I think that breaks down lots of the indirect discrimination that happens, but also lots of the direct discrimination that happens with disability.

“Disabilities are an inherent part of our community. We need to recognise it as such and respect it as such. Then, respecting it as such requires us to ensure that people with disability have access to the same rights and lifestyle that everybody else has. The same right as the general population.”

Ms Kayess says she doesn’t feel there is any basis for us to see disability as something special or something different. It’s part of the human condition so, as a community of humans, we need to make sure our environment is structured for all.

As Ms Kayess predicted earlier, the storm has now passed. The noise emanating from the foyer has settled, as the students empty out onto University Mall as the sun reappears. As we’re about to wrap up our conversation, I ask if she has any parting words she’d like to add.

“It’s about not seeing every person with a disability as if they are in some way deficient and need care and protection. It’s about not making assumptions about the fact that somebody doesn't know what they're doing or doesn't know how to do things, but to treat them with dignity and respect. It's also about being prepared to engage. And you can’t catch disability. Don't be frightened of people with disability.”

Opinion|07 Jul 2020
Southeast Asian democracies in declining health amid COVID-19
An illiberal turn across the region has been exacerbated by the pandemic. Australia should take note.
Mentions
Melissa Crouch
Opinion|Thought leadership|25 Jun 2020
Liminal Law: Understanding how law relates to life
Dr Marc De Leeuw uses a philosophers lens to investigate Law, life and the presuppositions we work with. For example, does nature have a right to life?
Mentions
Marc De Leeuw
Opinion|25 Jun 2020
Dyson Heydon’s misconduct is nothing new in the legal profession
UNSW's Jayne O'Connor says sexual harassment allegations indicate a need for reform in the highly traditional court system.
Opinion|25 Jun 2020
Every step you take: why Google's plan to buy Fitbit has the ACCC's pulse racing
The watchdog has voiced concerns over the proposed US$2.1 billion merger, from which both users and Australian health services could lose out.
Mentions
Katharine Kemp
View more