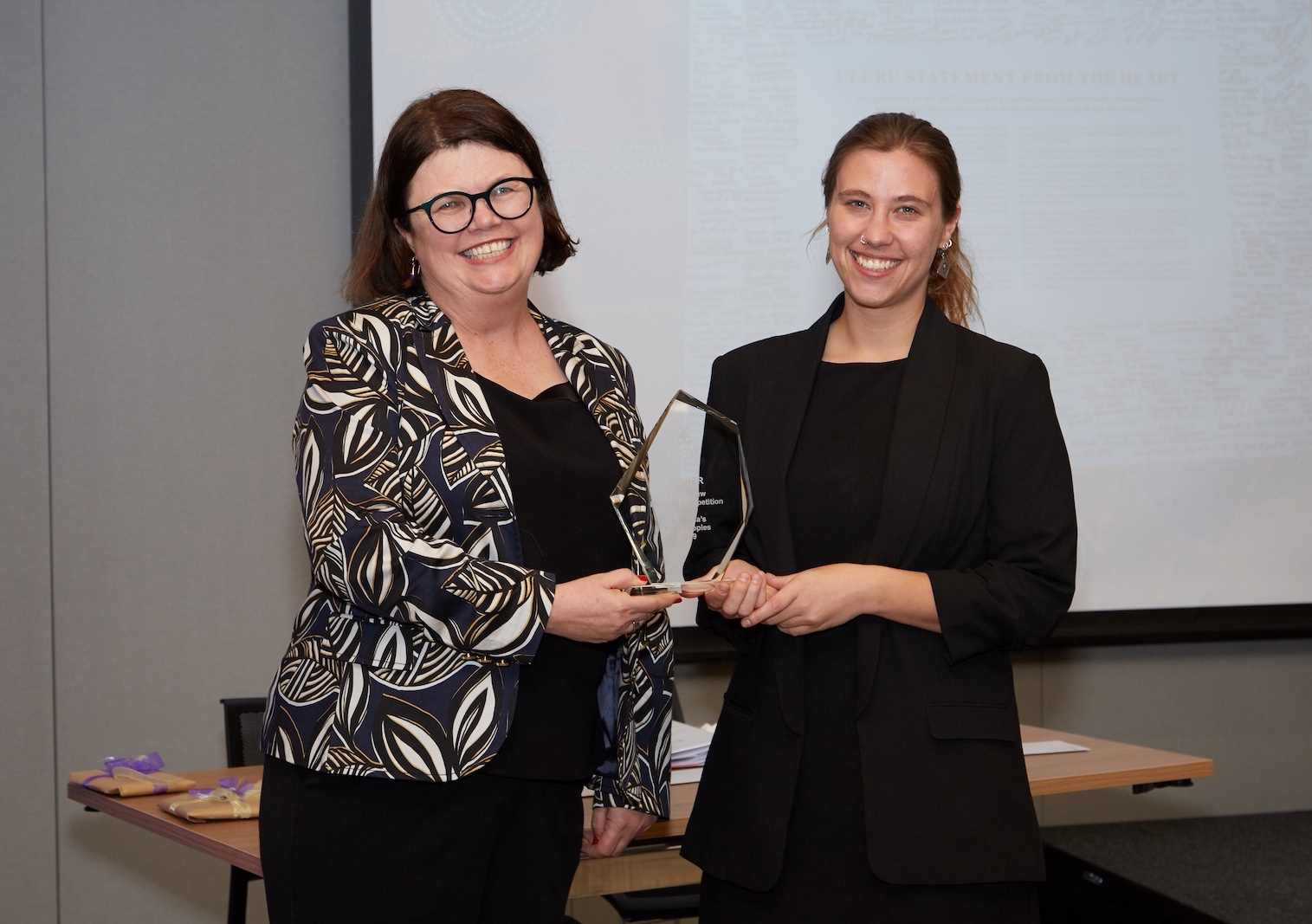 The 2019 Grand Final of the Mooting Competition of Australia’s First Peoples was held at Gilbert + Tobin’s offices in Barangaroo on Thursday October 3. The competition showcases the advocacy skills of Indigenous law students from UNSW as well as UTS and Western Sydney University (WSU).

Mr Dean Kelly, a Yuin and Wailwan man raised in La Perouse, opened proceedings with a stirring account of the importance of Aboriginal law and environmental and cultural protection. This year the mooting topic concerned an application to the High Court by the Gomeroi People, who challenged the constitutional validity of hypothetical Commonwealth legislation to affect the outcome of a decision under the Aboriginal and Torres Strait Islander Heritage Protection Act 1984.

Ms Franks' submissions helped win the day for the Gomeroi People, as Justice Natalie Adams ruled the Commonwealth's legislation invalid for its contradiction of the 'No directions' rule and inconsistency with the federal race power. Peter Rumble (WSU), appearing for the Commonwealth, was a close runner-up, while Ashlee Christian (UNSW) and Jessie Robinson (WSU) rounded out the top four.

The competition was both a challenging and rewarding experience for Ms Franks.

“It was wonderful to connect with and collaborate with Indigenous law students from other universities. The Moot gave me an opportunity to get a sense of how to write legal submissions and what it’s like to speak in front of a Judge,” she says.

“It was also excellent to be part of a competition that really highlighted the constitutional law dilemmas confronting sovereignty and empowerment for our people and challenged us to look at how to make a better future.”

The Mooting Competition of Australia’s First Peoples started in 2014, when Teela Reid – Wiradjuri woman and UNSW Law alumna (JD ’16) – approached UNSW Law with the idea of running a mooting competition for Indigenous students. Jeni Engel, Director of Indigenous Legal Education, and Ms Reid then developed a network of coaches, sponsors, ‘barrister mentors’ and judges to support the moot.

Every year, ‘barrister mentors’ are arranged for participants. Without fail, Sydney-based barristers volunteer to provide one-on-one support to competitors. The bonds that develop extend beyond short-term mentoring to foster meaningful relationships between Indigenous students and some of the most senior members of the legal profession. This year, two of the leading lights of Sydney’s Indigenous barrister community – Andrew Martin and Leon Apostle (UNSW LLB ’08) – participated.

Ganur Maynard, Student Coordinator for the 2019 Mooting Competition of Australia's First Peoples, participated in the 2014, 2015 and 2016 competitions and took home the crown in 2015.

“Speaking as a former participant, the moot gave me a better grasp of written and oral advocacy skills and brought me closer to my teammates, adversaries, mentors and judges,” he says.

“For me, the most important aspect of the mooting competition is the space it provides our community to get to know one another and improve our abilities. There are many very talented Aboriginal and Torres Strait Islander law students throughout NSW, and the moot provides these students with a challenge on topics that are of great interest to our people.

“The ultimate intention is that students will be inspired by one another and the people they meet throughout the competition to consider careers in the law, especially those involving Indigenous affairs.”

Mr Maynard says the time frame and workload of this mooting competition makes it more difficult than many others. In just over a week, competitors prepare written and oral submissions for both the plaintiffs and defendants in a hypothetical case.

“This allows us to provide a rigorous competition regardless of time frame or number of competitors, but it is also a challenging prospect. Many students find subsequent competitions easier than the Mooting Competition of Australia’s First Peoples, so the moot is a good confidence booster in that respect.”

Mr Maynard graduated from UNSW Law in 2019. A descendant of the Kamileroi people, he grew up off-country in Newcastle. He says that part of the reason he chose to study at UNSW was the history the University has with Indigenous people and the law.

“I’m grateful to have studied and worked at an institution that provides Indigenous students the space, support and respect required for us to achieve great things and improve the status of Aboriginal and Torres Strait Islander peoples in this country and beyond.”

Achievement|02 Jun 2020
The young alumni taking the legal profession by storm
UNSW Law alumni are amongst the young guns of the legal profession recognised at annual industry awards.
Achievement|05 May 2020
Madeline Gleeson: A 2020 Young Woman to Watch in International Affairs
The senior research associate is recognised for her work on international human rights and refugee law.
Mentions
Madeline Gleeson
Achievement|Research|05 May 2020
PhD Excellence Awards - 2019
We are pleased to announce the recipients of the 2019 round of the annual PhD Excellence Award
Achievement|22 Apr 2020
Commerce/Law student Alex Zoras shares her experience of sitting the LAT
Follow your instincts, give it your best shot and the Law Admission Test can be an enjoyable experience says UNSW Law Student.
View more