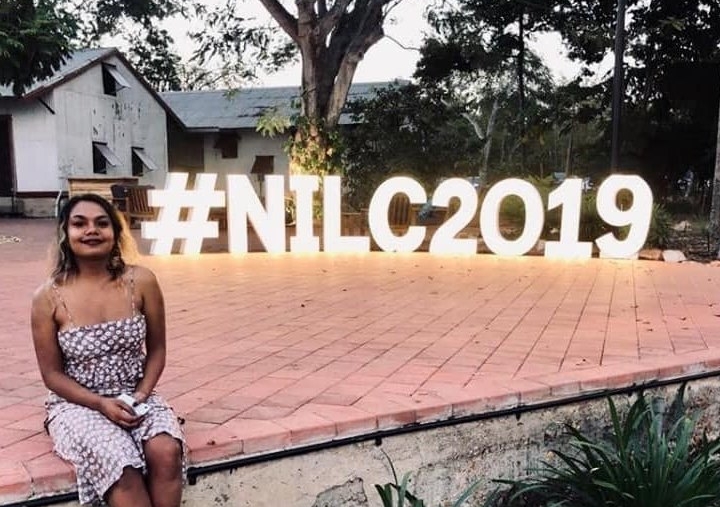 Gumbaynggirr and Barkindji woman Merinda Dutton showed an interest in law when she began high school in Grafton.

“I was very passionate about unpacking and critiquing systems that disproportionately affected Aboriginal people and I could see the effect of that in my own community and family,” she says.

“My Dad’s story as a stolen generation survivor has been a very strong force in motivating me to study law and it is something I have come back around to as a lawyer representing stolen generations survivors.”

Fast forward to 2019 and UNSW law alumna Merinda Dutton has been named recipient of the National Indigenous Legal Professional of the Year Award at the National Indigenous Legal Conference in Darwin. The Attorney-General’s Department award acknowledges the achievements of Aboriginal and Torres Strait Islander Australians who demonstrate a passion and commitment to improving justice outcomes for Aboriginal and Torres Strait Islander Australians.

Ms Dutton graduated from UNSW in 2013 with a Bachelor of Jurisprudence/Bachelor of Laws. She was a recipient of the Landon-Smith Family Scholarship in 2008 and the Paul Doneley Memorial Scholarship in 2009. The Landon-Smith Family has been funding scholarships for UNSW students since 2002. These scholarships not only alleviate the financial burden that many students face, but also provide students with invaluable support and encourage them to pursue their goals.

Ms Dutton is now a senior lawyer at the Civil Law Service for Aboriginal Communities at Legal Aid NSW. Based in Lismore, she joined Legal Aid NSW in 2014 and delivers advice and casework assistance to Aboriginal people across NSW, including women in custody.

“In the short term, I am hoping to achieve reparations for as many stolen generations survivors as possible,” she says. “In the long term, I hope that I can get to the end of my legal career and say that I have been fearless in seeking justice and truth and that I have played a part in supporting Aboriginal people and communities to be self-determining.”

As a senior lawyer at the Civil Law Service for Aboriginal Communities, Ms Dutton says the highlight of her role is being able to work with community to deliver services that suit them.

“I get to meet so many strong and resilient Aboriginal people that make me proud to be their lawyer,” she says.

The lowlight of the job for Ms Dutton is “when the law isn’t fair”.

Ms Dutton’s casework at Legal Aid NSW includes presenting evidence at The Royal Commission into Misconduct in the Banking, Superannuation and Financial Services Industry in Darwin on behalf of her client. The submissions put forward by Ms Dutton to the Royal Commission highlighted critical systemic issues, inappropriate sales practices and misleading conduct on the sale and marketing of insurance products to Aboriginal and Torres Strait Islander people and communities.

“Having known Merinda since she gained admission to law at UNSW through undertaking our Indigenous Pre-Law Program in 2007, it was a huge thrill to be present when Merinda was named Indigenous Legal Professional of the Year,” Ms Engel says.

She says Ms Dutton’s passion and commitment to social justice - especially in seeking reparations for members of the Stolen Generations – “are deeply felt and make her the effective lawyer she is”.

“All of us at UNSW Law who had the pleasure of teaching and working with Merinda congratulate her on this well-deserved recognition,” Ms Engel says.

“We're proud to have Merinda as one of our Indigenous alumni and know that she'll continue to use her legal education to improve justice outcomes for Aboriginal and Torres Strait Islander people.”

Ms Dutton says it is an honour to receive the National Indigenous Legal Professional Award of the Year, which she says is her greatest achievement to date.

“On a personal level, it is very humbling to have even been nominated. To actually be successful in receiving the award is surreal,"she says.

"The previous recipients of the award are people I deeply admire and look up to as colleagues and as mentors. On a professional level, receiving this kind of recognition motivates me in my purpose for continuing to seek justice for Aboriginal people and communities.”

For current and future UNSW law students, Ms Dutton offers the following advice: “Change isn’t easy and it doesn’t always feel good. But don’t be afraid to be a disrupter of the status quo.”